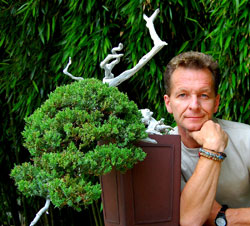 Mr. Sean Smith lives in the United States in Marysville Pennsylvania, where he owns and operates Custom Oriental Wood-craft.  Sean took his 20 year passion for Bonsai and Suiseki along with his extensive background in carpentry and put all them together to start his own business in 1994. He currently creates Bonsai display tables, and carves Daiza for renowned Bonsai and Suiseki enthusiasts all over the world.  As a result of this work many awards have been bestowed upon him for his craftsmanship as well as his strict adherence to these ancient Japanese art forms.

In 2004, Sean was asked by Senji Morimae to come to Japan to study Bonsai and Suiseki at his nursery outside of Tokyo.   With a passion for constantly learning, Sean accepted the invitation.  As a result he was able to hone his skills as well as broaden his knowledge of Japanese related antiques.  Sean continues to make this trip every year and has been fortunate to have studied the following art forms. He is highly recognized as one of the leading authorities of formal Tokonoma display in the West.

Currently, Sean lectures all over the United States as well as Central America and Europe on Bonsai, Suiseki and Daiza carving, Formal display.  He is also a contributing editor of many international Bonsai and Suiseki magazines as well as the North American Viewing Stone Society, and the International Stone Appreciation Society.  He is also a former director of the National Bonsai Federation in Washington DC., as well as a member of the Nippon Suiseki Association, European Suiseki, and past president of the Susquehanna Bonsai Club, in Harrisburg, Pennsylvania. In addition, he is the head organizer for the International Stone Appreciation Symposium held every 2 years since 2002, in Harrisburg, PA.

Sean will be working on a Shimpaku, and holding a Q& A Session. Hope to see you there!